Community gatherings are an integral piece of the social interaction and intergenerational transmission of knowledge to all members. There are specific large gatherings listed below that happen annually in Eagle Lake. They are utilized as both a social connection and educational component to continue our way of life for the next generations. Each event is designed to build the connection to the land in our traditional territory. 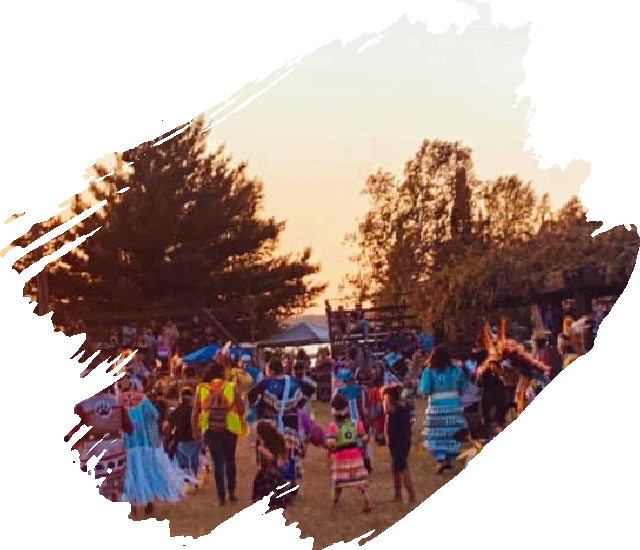 Eagle Lake First Nation hosts their annual traditional pow-wow August long weekend each year. It’s a time when ceremonies are honored, past times cherished and families can get together to celebrate and dance. The pow-wow welcomes all dancers and visitors.

This 3 day event occurs annually in mid-July, and takes place along the shore in the community where participants are invited to camp. Community members and visitors are invited to gather and participate in a series of Cultural, Therapeutic, and Wellness Workshops and fun activities for all ages. Evenings are filled with entertainment such as  Karaoke, Live Bands, and Special Guest Performances.

Each year, in October the community will gather at North Bay Landing within our traditional territory for the moose hunt. Moose is a significant cultural value and food source. It is a time of social gathering, intergenerational transmission of traditional knowledge and ceremonial teachings.

The idea originated from Elders in the Community to gather at a historic travel site in Osbourne/Nevins Bay area identified as a place of battle between the Sioux and Ojibway. This is illustrated in Rock Paintings found in the area. The Cultural Camp occurs annually in August and aims to educate Community Members about the history of our Ancestors and their way of life to trap, hunt, fish, wild rice picking, berry picking, traditional herb and medicines picking, ceremonies, as well as seasonal family gatherings.